It all started in the pub

Leicester Running Shop is the first and only independent running shop in Leicester since the early 90’s. This local business (not just for local people!) first opened its doors in November 2007.

So where did the idea come from? Well obviously, the inspiration for the shop originated in the pub! Where all the best ideas come from.

Back in 2005 I mentioned to a few friends over a beer that I was on the lookout for a new job. They knew I ran a lot and one suggested half-jokingly that I should sell dedicated running shoes, knowing I found them hard to get hold of. Oh, how we laughed.

Until, in a peculiar twist of fate, four days later I was made redundant and the throwaway comment he made came back to mind. And it stuck. And it grew.

A good year and a bit later I was gainfully employed doing interim jobs at Leicester City Council and landscape gardening. But in my spare time I was busy doing plenty of research into the running shop idea.

I set about getting as much information as I could by:

16 months on, I was in a position to find premises.

Again fate was at hand as the premises I’d spent six months negotiating the lease had bit of a problem. I’d all but signed the lease of the shop, near Rosemead in Oadby, and wanted one final look before signing.

On entering the property there was a scene of disaster: the roof leaked after a heavy rain storm the previous night and the ceiling had come down. I dodged a bullet on the repair bill. I then needed a place, and had only a few months to find somewhere to keep the loan.

Then another bit of luck! Only a week or so later in Aug 2007 a shop came up for lease on Clarendon Park Road. It was owned by a friend from my running club who’d used it for a computer repair shop.

I called in him in Canada that night, where he’d emigrated to, got the nod and foot in the door with a verbal lease agreement. Shop fitting started, thankfully with help another friend from running who previously was a shop fitter would you believe.

Late October stock started to be delivered and Nov 10th, 2007 I opened the doors of Leicester Running Shop.

A growing team of passionate runners

Initially I ran the shop on my own but after about two months it was apparent I couldn’t keep up on my own.

I got help on Saturdays’ from a student doing her A levels at QE college, then a few months later another friend from running helped on a few week days. Both of them were brilliant and just ran away selling shoes.

Since the early days, the Leicester Running Shop team has grown and there are four of us now. 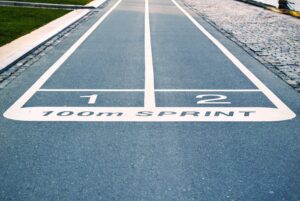 Is a running coach worth it? 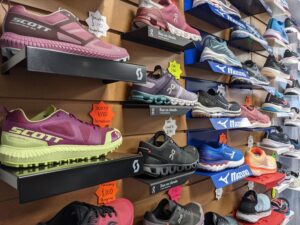